What is scaling induction time?

One of the premier issues in the oil and gas industry is scale deposition which occurs due to changes in process conditions, such as pressure and temperature changes, dissolved gases, or incompatibility between mixing waters, resulting from waterflooding processes and chemical treatment operations. Usually, these processes are performed to maintain sustainable hydrocarbon production at oil, gas, or gas condensate fields. The most common oilfield scales are sulfates such as CaSO4 (anhydrite, gypsum), BaSO4 (barite), SrSO4 (celestite), and CaCO3 (calcite). In contrast, iron oxide, sulfide, carbonate, and calcium naphthenate scales are less common and generally found in sour crudes.

The formation of mineral scale from an oversaturated solution involves two distinct stages: nucleation, a stage of solid formation via a reaction between the dissolved constituents, and crystal growth, a stage during which the solid grows via a reaction/aggregation with the dissolved nucleus. The duration of this process can reasonably be estimated by the “induction time,” which is classically defined as the time that passes from the creation of oversaturation regarding a solid phase and the detection of that phase in the system due to precipitation.

What are different scaling mitigation techniques?

Conventional scale inhibitors are hydrophilic; that is, they dissolve in water. However, in the case of down-hole squeezing, it is desirable that the scale inhibitor is adsorbed on the rock to avoid washing out the chemical before acting as desired. Inorganic phosphates, organo-phosphorous compounds, and organic polymers are identified as the most common scaling inhibitors. For example, PPCA (polyphosphono carboxylic acid) and DTPMP (diethylenetriamine penta (methylene phosphonic acid)) are the two common commercial-scale inhibitors used in the oil and gas industry.

Fundamentals behind the scaling kinetics calculation with the OLI Engine?

OLI has developed a computational tool/ feature to predict the induction time for inorganic mineral scales both with and without the presence of commercial scale inhibitors. The tool combines two fundamental theories: Mixed-Solvent Electrolyte (MSE), an electrolyte thermodynamic model, which predicts speciation and phase equilibria (solid-liquid equilibria) up to high concentrations, including supersaturation, and the classical nucleation theory, kinetic model, for predicting induction time in both the high and low supersaturation regimes. The kinetic model requires the scaling tendencies of each precipitating solid as an input estimated from the thermodynamic model.

How can someone use OLI studio to calculate scaling induction time? 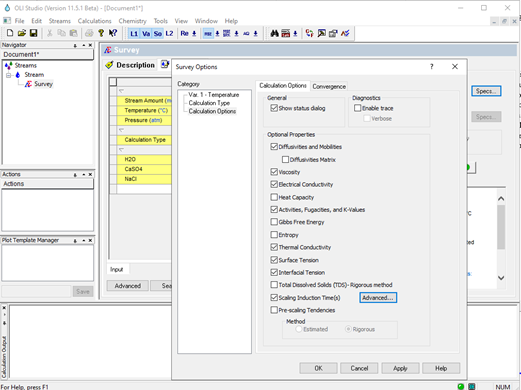 How does selecting certain solids work in the OLI studio?

The advanced option in the “OLI survey options” tool provides a list of all possible solids that are likely to form in the system simulated. Sometimes, although the formation of a certain solid is thermodynamically feasible, it may take longer to precipitate/ form due to the kinetic effects. Such solids have a lesser impact on the induction time and are advised to be excluded by unselecting (unchecking the box before the solid). OLI implicitly excludes several solids primarily based on the slower rate of formation, which, if needed, the user can include in the induction time calculation by explicitly selecting it by checking the box preceding the solid. 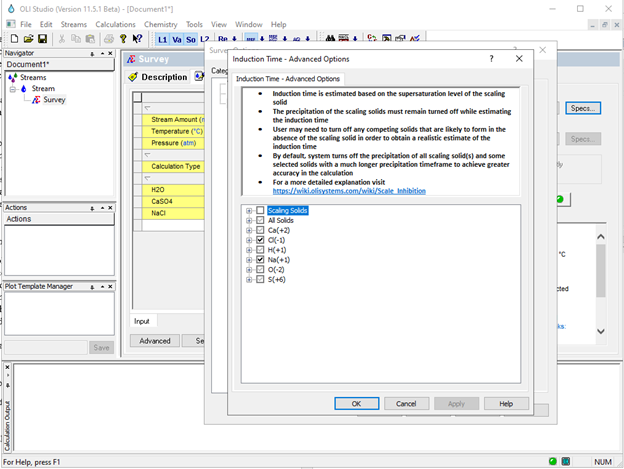 What tools are available for predicting scaling risk and inhibition study?