Passivation is included in the general corrosion rate model. For a description of how the passive layer is modeled, further information can be found in the paper: “Computation of Rates of General Corrosion Using Electrochemical and Thermodynamic Models” by Anderko et al., under the section “Active-Passive Transition”, see reference below. Additionally, the "Applications of the model" section, describes how this model reproduces selected experimental data.

The corrosion rate model includes the effect of FeCO3 and FeS scales. These scales form on the surface of steel depending on environmental conditions. They are not passive films because they do not give rise to an active-passive transition (which results from the formation of oxide or non-stoichiometric oxide/hydroxide layers). However, they do affect corrosion rates by forming surface barriers and affecting both the anodic and cathodic dissolution in the active state. Their effect is most important for carbon steel and less important for corrosion-resistant alloys. A description of how the scales are modeled can be found in more detail in the paper below:

No, the general corrosion model includes only the effect of the scales that form as a result of electrochemical reactions between the metal and dissolved CO2 or H2S. The carbonate, sulfate or silicate scales are not included. It would be very difficult if not impossible to model the effect of such scales because their effect depends of the rate of deposition, history of formation, adherence, etc. for which there is no suitable quantitative model. The additional scales should be considered as factors that can reduce the corrosion rate, but the extent of the reduction cannot be predicted.

4. Under determined conditions, the Pourbaix diagram indicates that a passivation layer of Minnesotaite will form, yet the corrosion analysis output presents a significantly high corrosion rate. What could be the reason(s) for this? Does the software assume that the passivation layer formation is kinetically slow, and so ignore its effects?

The possible effect of minnesotaite is not included in the model for the prediction of corrosion rates. The thermodynamic prediction of the stability of this species should be considered as an indicator that the rate can be further reduced but there is no theory that would allow us to quantify such a reduction.

5. If a case involves a specific carbon steel alloy, for example L-80, which is not included in the OLI material database, what can be done to predict the corrosion rates in the OLI Corrosion Analyzer Software?

6. Is it possible to manually add alloys for corrosion rate simulations?

It is possible, but no facility is provided for a user to do it. This is done internally at OLI. For example, in the case of L-80, it is recommended to use the generic carbon steels as this should be a good approximation. 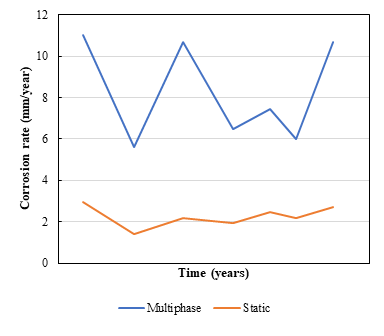 In general, large differences between static and multiphase flow conditions such as the ones shown in Figure 1 are to be expected when the metal is not passive (and carbon steel is certainly not passive in typical CO2/H2S environments). Then, mass transport of reacting species (such as protons (H+), carbonic acid molecules (H2CO3) and hydrogen sulfide (H2S) is numerically important in the electrochemical reactions.

8. Does changing the dimension of a pipe’s diameter change the estimation of the corrosion rate?

The default pipe diameter in the software is 10 cm which is 3.937 inches. This can be changed as required. We have performed a series of corrosion rate calculations at various pipe diameters, and in Figure 2, it can be seen a change in rate. As the diameter of the pipe increases, the corrosion rate decreases. 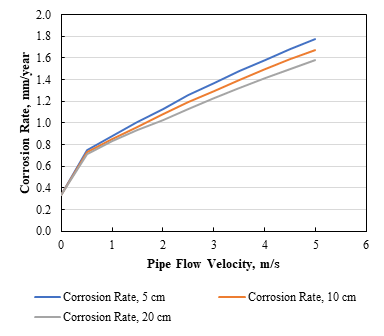 9. What are the differences between the static, pipe flow, approximate multiphase flow, and shear rate calculations? How are the corrosion rates estimated based on these different types of flow?

The fundamentals of our model are described in the two attached “General corrosion” papers: