Difference between revisions of "General Questions"

1. Does the Natural pH and ORP together determines the corrosion properties of the solvent?

These are two important properties of the solvent but they are not the only ones. There are other phenomena that affect the corrosion behavior like complexation of the metal with solution species and formation of sparingly soluble solids, which may form surface scales.

2. For example, is the solvent of 70 vol.% H2SO4 represented by a point on the stability diagram like the following ORP point on the Natural pH line.

In the case of H2SO4, these are the key properties because sulfuric acid does not form complexes with common metals. At very high concentrations (well above 70%), there may be precipitation of sparingly soluble metal sulfate phases, which may affect corrosion.

3. To know the performance of same alloy in different acids is it true that the stability diagram wouldn't show the difference of the acid since the x-axis is the pH value, different acids could give the same pH value?

The pH value results from the properties of the acid. The Corrosion Analyzer calculates the pH for each acid based on the thermodynamic properties of each acid (in other words, this is not a hypothetical pH like in the original work of Pourbaix). Still, if you generate an E-pH diagram, you will not see immediately which pH corresponds to which acid concentration. I have a feeling that the E-Species Amount diagrams would be more useful to differentiate between various acids. Just generate an E-Species Amount diagram (in the Chemical Diagram category) as a function of the concentration of each acid (preferably on a logarithmic scale). 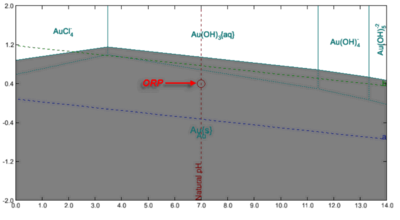 4. Does the green area in the following diagram show the two phases equilibrium between various species in liquid (such as Zr(OH)4) and ZrO2 (solid)? The green area simply shows the stability areas of solid phases that are not metals. Typically, these are oxides or hydroxides but they may be also salts. In the example below, the solid phase is only ZrO2(s). The solid phase is always shown in larger letters. The solid phase coexists with the aqueous species that are shown in small letters. In the case below, the species depend on pH and are Zr(OH)22+, Zr(OH)3+, etc. 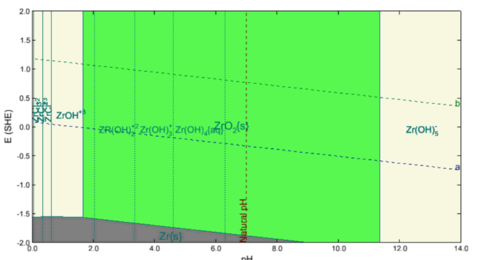 The main virtue of the stability diagrams is their ability to predict the tendency for corrosion for a given metal or alloy as a function of varying environment composition (not only as a function of pH). They are not sufficient for alloy design because there are various electrochemical kinetic and microstructural factors that go beyond the realm of thermodynamics. For example, if you generate stability diagrams for various stainless steels, you will see little difference in the stability diagrams between them (i.e., there will be some difference but it will not explain the whole complexity of behavior). To understand the differences in the general and localized corrosion of various alloys such as stainless steels and Ni-base alloys, you need electrochemical analysis, which is also included in the Corrosion Analyzer (i.e., corrosion rates and localized corrosion). The key point that the stability diagrams alone show the tendency for corrosion for various metals in various environments but they do not include the kinetic and structural factors that are important for alloy design.

6. Will metal carbides form and exist in aqueous solution? Will the Pourbaix Diagram of Me-C-O-H systems predict such species?

Carbides are certainly well-known as solid phases and are responsible for mechanical properties of metals (and to a lesser extent for corrosion properties). However, there is not any indication of carbide species in solution. There are various types of carbides – some are reactive (like calcium carbide), some are more or less chemically inert (line interstitial carbides within metal lattice structure) and some are intermediate (like iron carbides, of which cementite F3C is the most common). The reactive carbides can be easily visualized as having carbon on a negative oxidation state such C22-. Such carbon absolutely cannot exist in an aqueous solution because it immediately hydrolyzes. For other carbides, it is not practical to define oxidation states, but they also have a tendency to hydrolyze. In dilute acids, iron carbides will hydrolyze to hydrogen and simple hydrocarbons. For this reason, it would not be thermodynamically justifiable to consider carbide solution species (of course, you can always postulate various transient, short-lived species but it is not expected that these species reach a thermodynamic equilibrium).