Difference between revisions of "Scaling Tendencies"

Scaling is the deposition of a mineral salt on processing equipment. Scaling is a result of supersaturation of mineral ions in the process fluid. Through changes in temperature, or solvent evaporation or degasification, the concentration of salts may exceed the saturation, leading to a precipitation of solids (usually crystals).

The saturation level of a salt in water is a good indicator of the potential for scaling.

What is a Scaling Tendency?

The three possible ST scenarios are the following:

For the usage of the term in the software, it is defined as

Pre-scaling tendency is the same formula except for a situation when solids are not allowed to form. The mass transfer between LIQ phase to SOL is not considered while calculating these values. That is the only way to predict 'pre-scaling' tendencies.

For Example, Consider this dissolution

The Ion Activity Product (IAP) is defined as the product of specific ions (in this case the ions resulting from the dissociation of a particular solid). 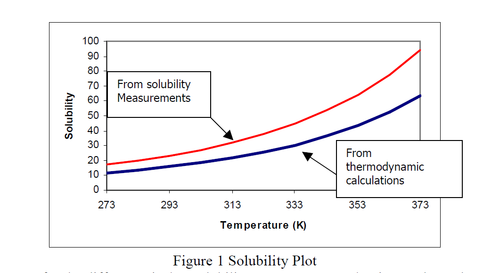 The Solubility Product (KSP) is the thermodynamic limit of ion availability

The Scaling Tendency is then the ratio of available ions to the thermodynamic limit.

The actual species concentration and activity coefficients are:

This results in a different IAP

The new Scaling Tendency is therefore:

Why are the concentrations not equal to 1.0? Speciation and chemical equilibria tend to form complexes which provide a “Sink” for carbonate species. In this example:

What does the Scaling Tendency Mean?

The post-scaling tendency can go over 1.0 in special cases. If you have disabled a solid from forming (via the Menu Item: Chemistry: Model Options: Phases Tab) then it is possible to have a scaling tendency greater than 1.0. Also if the temperature is above a solid’s Temperature Range (TRANGE) then it can also be above 1.0. Please refer to the TRANGE support tip.